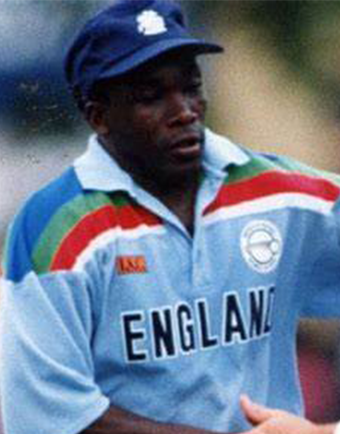 Gladstone Small, originally from Barbados, was a member of the England set up between 1986 and 1992. He made his first-class debut for Warwickshire in 1979 and was a swing bowler for the Bears. He would go on to play all his county cricket for Warwickshire throughout his 20-year career. During his first-class career Gladstone took over 800 wickets and almost 500 poles in List A games. In the mid-80s, Small had a stint in Adelaide at South Australia.

He made his test debut at Trent Bridge in 1986 against New Zealand, taking 4 wickets in the game. Small went on to play 17 times for England in whites, taking 55 wickets along the way. He was also a central figure in the ODI side, where he played 53 times. He made the World Cup squad in both 1987 and 1992 helping the England side to 2nd at both events.

Since retirement, Gladstone has maintained his role in cricket and has been a director of the PCA. He now travels the world guiding cricket tours with Black Opal, giving fans an insight into the cricket as well as warm hospitality as England tour the globe.

Gladstone is available for a variety of functions and events and is experienced in speaking and presenting through his travel work. One of the most recognisable and popular men in world cricket, he is also available for TV and Radio and is able to give cricketing insight and expertise as well as a vibrant personality